WordPress Google Maps Guide: Embed With or Without a Plugin

Looking for a way to embed WordPress Google Maps content on your site?

Like a lot of things in WordPress, there are several different ways that you can embed Google Maps on your site depending on what type of map content you want to include.

In this post, we’ll start by showing you how to add Google Maps in WordPress without a plugin. Then, we’ll recommend some plugins that can help you embed Google Maps, as well as some of the benefits of going that approach.

Finally, we’ll end with some performance considerations for using Google Maps on WordPress and share some tips on how to keep your WordPress site loading fast even if you do need to embed Google Maps.

You can click below to jump straight to a specific section or just read through the whole thing.

How To Add Google Maps In WordPress Without A Plugin

If you just want to embed a simple map and don’t need more detailed functionality like custom location markers or other annotations, you can embed Google Maps without a plugin using the normal Google Maps website that you use on a daily basis.

Here’s how it works…

To get started, use the Google Maps website to create the map that you want to embed.

Once you have the map that you want to embed, click on the hamburger menu in the top-left corner: 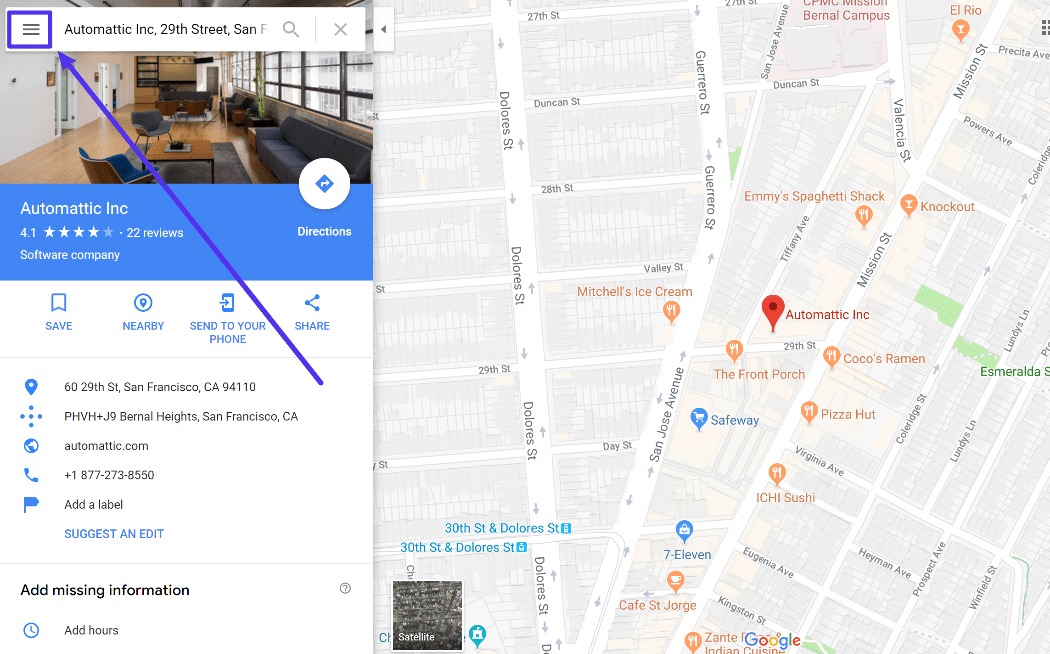 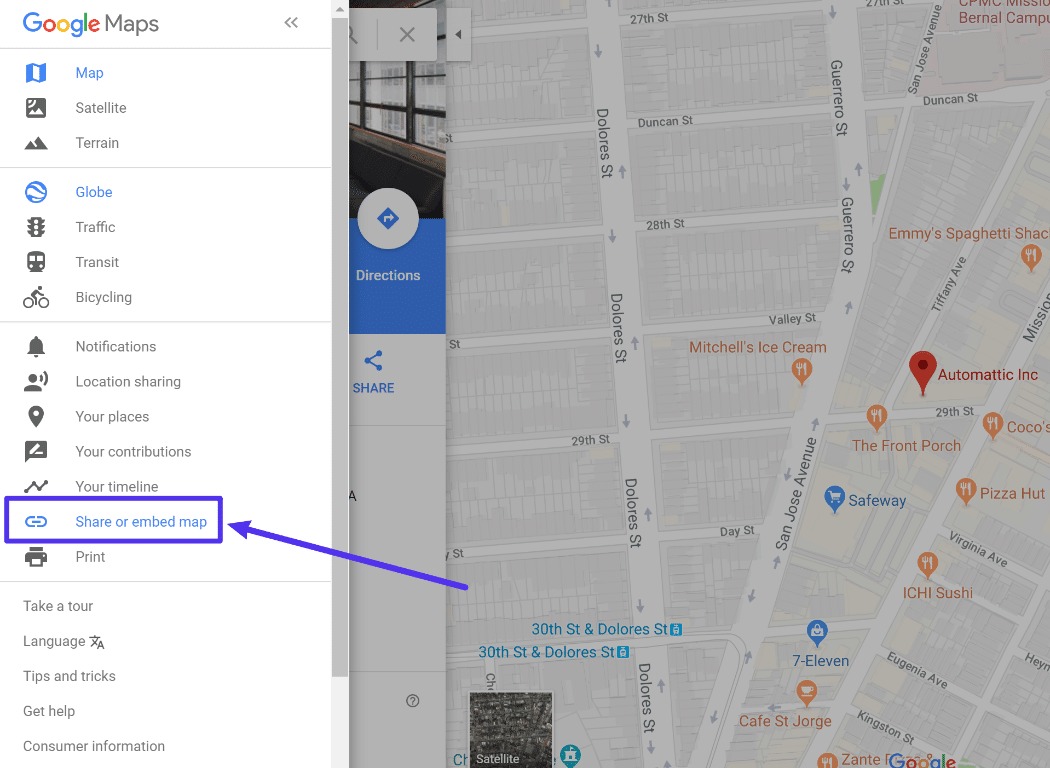 That will open up a Share popup. In that popup, click on the Embed a map tab.

Then, you can choose your desired size using the drop-down. For most WordPress sites, the default size works well, but you can make the map larger or smaller if needed.

Once you’ve done that, click on the Copy HTML button to copy the embed code: 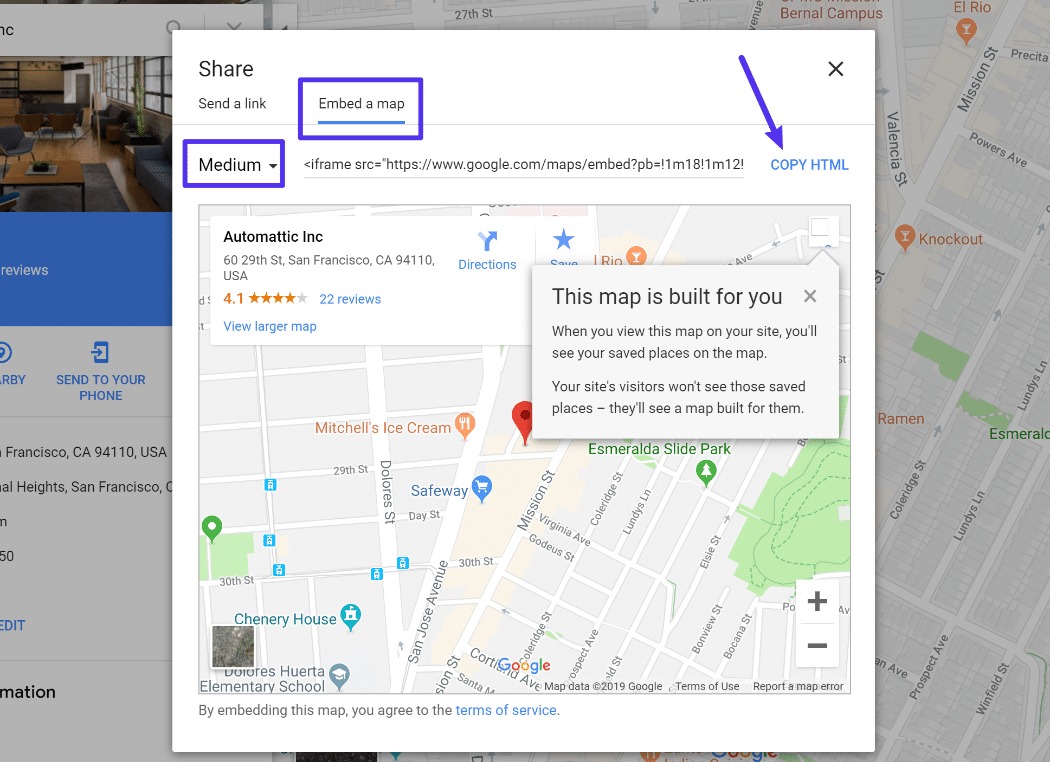 Now, all that you need to do is add that embed code to your WordPress site in the post or page where you want to include your map.

If you’re using the new WordPress Gutenberg block editor that was released with WordPress 5.0, you can do that by adding a Custom HTML block and pasting the embed code into the block: 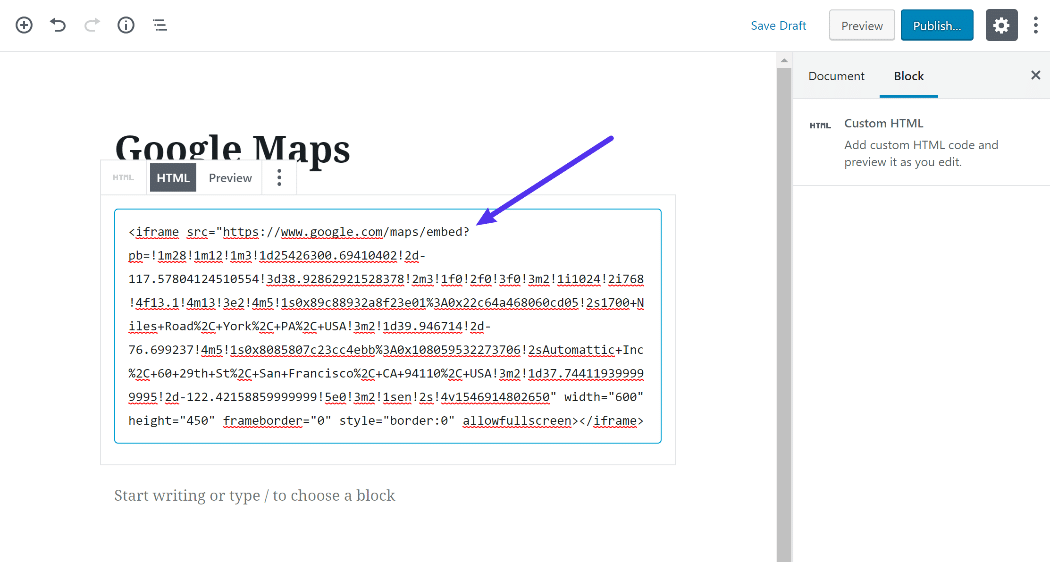 How to add the embed code in WordPress block editor

You can preview how your map will look by clicking the Preview button above the block.

If you’re still using the classic TinyMCE editor, you can add the Google Maps embed code by opening the Text tab and pasting the code there: 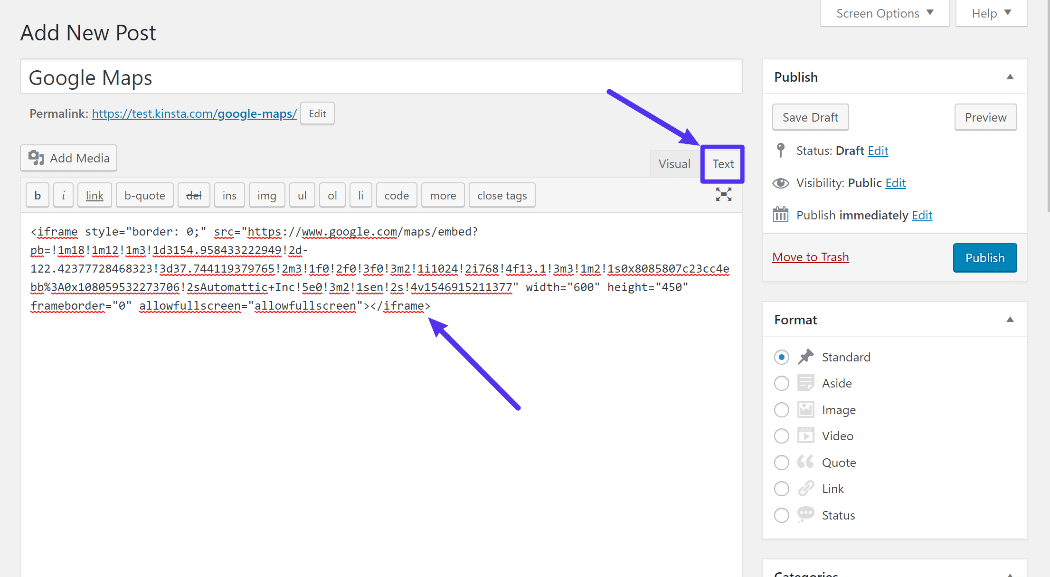 How to add the embed code in WordPress Classic editor

Once you add the code, you can go back to the Visual tab to see a live preview of your map.

And that’s it! You just learned how to add Google Maps in WordPress without a plugin.

If you want to get more creative when it comes to things like multiple location markers, custom annotations, etc., you can still do that without the need for a plugin with Google’s My Maps service.

My Maps is an official tool from Google that lets you create and share your own custom maps. With it, you could create something like the example below, with lots of custom markers and custom information that displays when a user clicks on a marker: Here’s how to use it to add custom Google Maps to WordPress.

Step 1: Create Your Map In Google My Maps

To get started, head to Google My Maps and create a new map. From there, you can use the map builder interface to build your map: 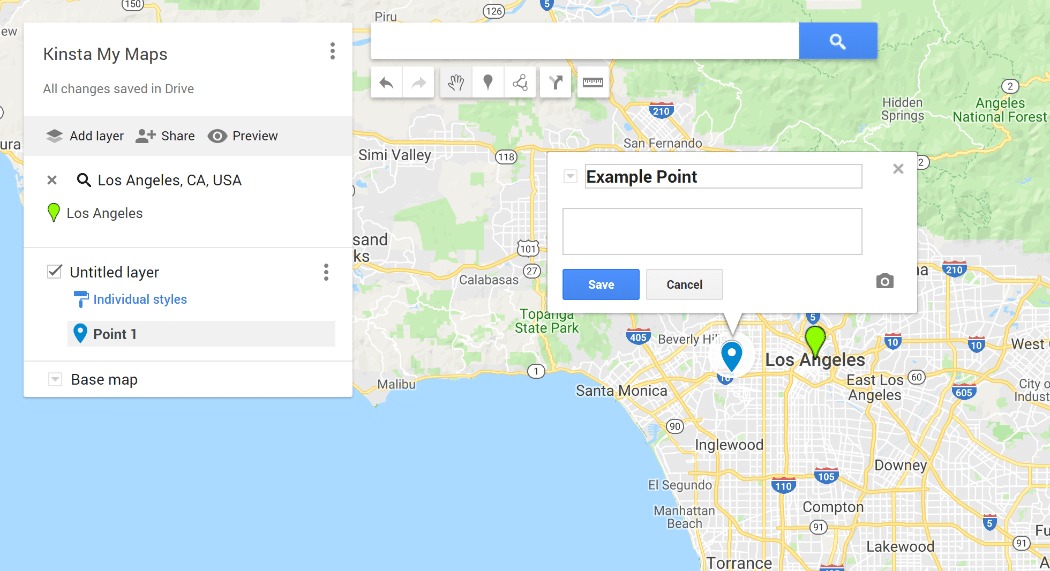 The Google My Maps interface

While we won’t cover it in too much detail, this interface lets you build some pretty creative maps. For a deeper look, this help article from Google covers a lot of the important functionality.

Once you’re finished building your map, you need to generate the embed code.

Before you can get that code, though, you first need to make your map public. To do that, click on the Share button. Then, click on Change…in the popup:

Then, select On – Public on the web and click Save: 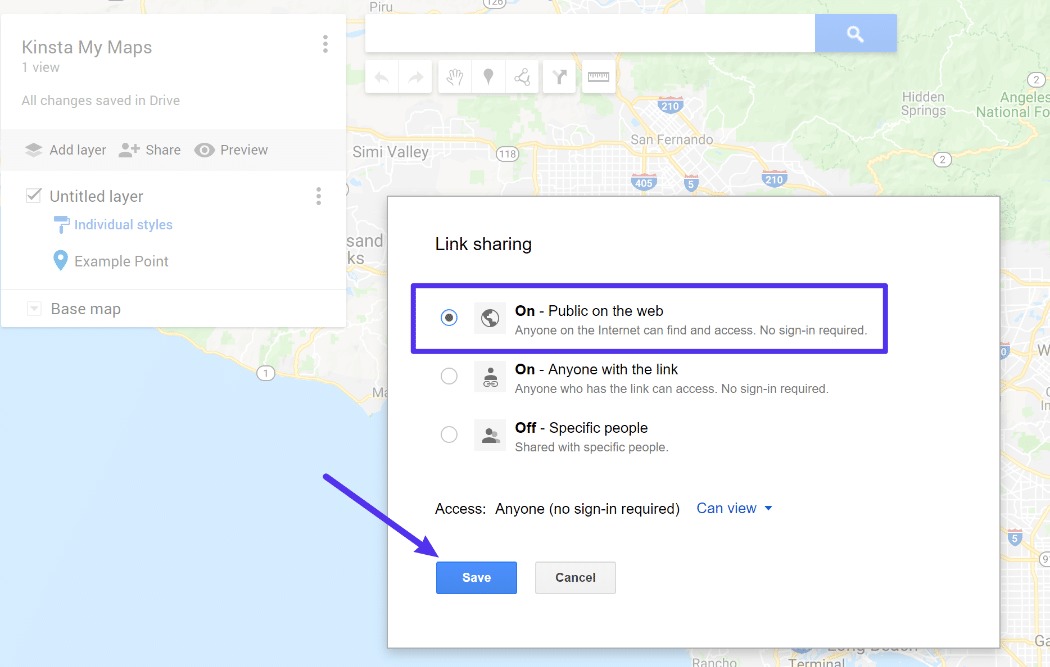 Once you’ve done that, click on the drop-down menu near your map’s title and select Embed on my site to generate the actual embed code:

That will open a popup with the code, which you should copy: 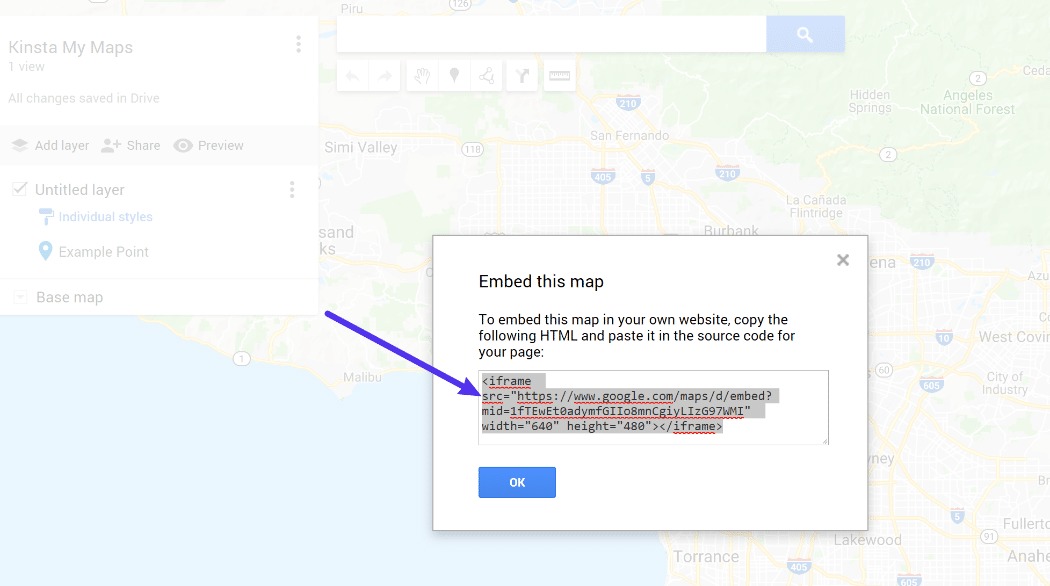 The My Maps embed code

Now, you can add that embed code to your WordPress site just like you would the embed code that you get from the regular Google Maps website.

If you’re not sure how to do that, click here to jump to that section of the tutorial from above.

Use A WordPress Google Maps Plugin Instead

Beyond the manual methods above, there are also tons of WordPress Google Maps plugins that can help you embed maps on your site.

There are a few reasons that you might want to consider one of these plugins over the manual methods:

For all of these plugins, you’ll need to generate your own Google Maps API Key before you can start embedding maps. This tutorial shows you how to do that.

Google Maps Widget is a simple Google Maps plugin that lets you embed a map using the Google Maps Static API, which offers a more performance-friendly approach by embedding a static image rather than an interactive map (we’ll explain more about this in the next section).

It’s a great option if you want something simple and lightweight. Once you activate it, you can add a Google Map to any widget area on your site. Then, visitors can open a larger interactive version of the map in a lightbox:

You can also use an interactive map right away if desired, and the Pro version lets you embed maps anywhere on your site with a shortcode.

Google Maps Easy helps you create custom maps with your own markers and annotations.

When you add markers, you have the ability to upload your own custom icons, include text and images in the marker description, and plenty more. You can also control how your map functions, like choosing whether or not to let users zoom in:

Once you build your map, you can embed it using either a shortcode or PHP function.

Intergeo is another popular option that lets you create your own maps with custom markers and have control over map functionality.

Once you install and activate the plugin, you’ll be able to build your maps right from your WordPress dashboard:

Then, you can embed them anywhere on your site using a shortcode.

With this block, you can embed any address and also choose:

It won’t let you create your own custom maps – but it is a convenient option if you use the new block editor and just want an easy way to include some simple maps.

While Google Maps lets you embed a ton of cool functionality to your site with its interactive maps, there is a performance trade-off because it needs to load a large number of scripts to power all of that interactive functionality.

There are a few ways that you can combat this.

First, if you don’t need people to be able to interactively browse your map on your website, a simple way to speed things up without any third-party tools is to:

That way, your site is just loading a regular image – not all of the scripts associated with Google Maps.

As an alternative to doing this manually, you can also use the free AWEOS Google Maps iframe load per click plugin. This plugin automatically replaces Google Maps embeds with a generic placeholder image. Then, if a user clicks the Load Map button, it will load the full Google Maps embed: 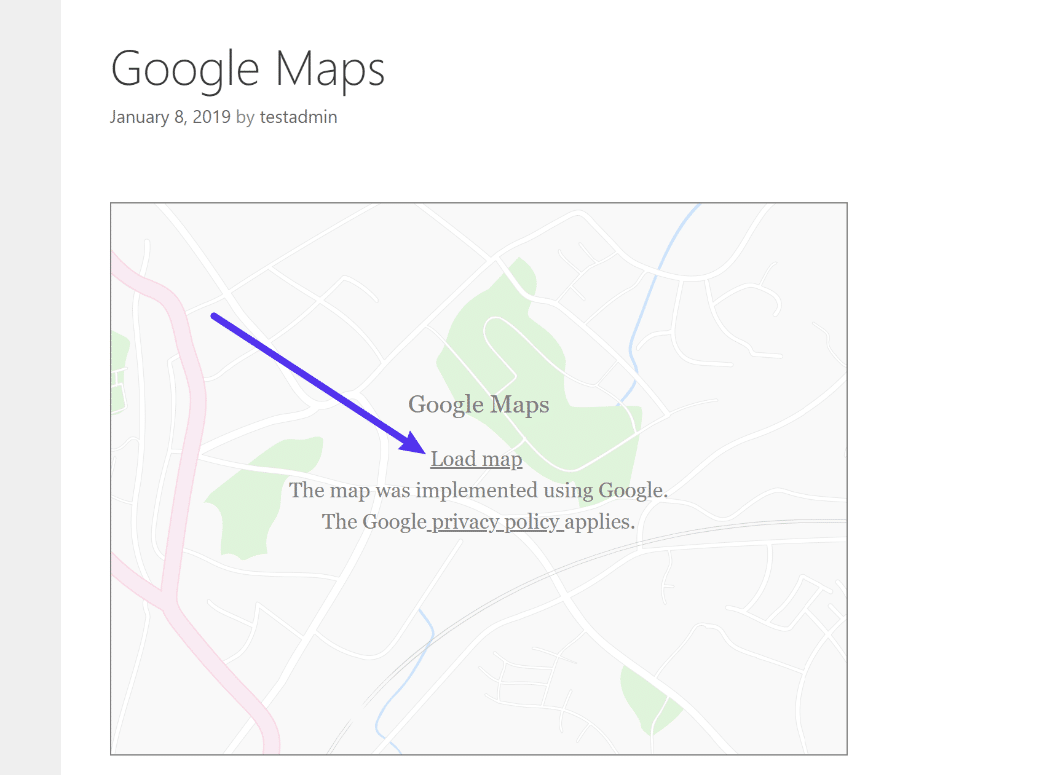 Or, you can also use the Google Maps Static API, which returns a regular image without any JavaScript. Some Google Maps plugins – including Google Maps Widget and Gutenberg Block For Google Maps Embed – let you use the Static API when you create your maps.

However, we realize that sometimes this static approach just won’t cut it, and a lot of people want to embed the interactive Google Maps experience right away.

If that’s the case, another good way to speed up Google Maps is to use lazy loading. With lazy loading, your site will wait to load any below-the-fold Google Maps embeds until visitors start scrolling down the page. That keeps your initial page load times fast, while still letting you embed interactive Google Maps content.

We’ve already written about how to lazy load images and videos and it’s the same idea for Google Maps.

There are a few plugins that will let you do this. For example, the a3 Lazy Load plugin lets you lazy load iframe embeds, which includes Google Maps: If you just want to embed a simple map on your site, you can add Google Maps to WordPress without a plugin using the built-in embed code feature. Or, you can use the Google My Maps tool to create your own custom map and embed that.

Beyond those manual methods, there are also plenty of Google Maps WordPress plugins that can give you lots of control without making you leave your WordPress dashboard.

No matter which method you choose, pay attention to the performance impact of using Google Maps. Try to only use Google Maps when absolutely necessary and consider tactics like placeholder images or lazy loading to decrease the negative effect on performance.

Do you have any other questions about using Google Maps on WordPress? Let us know in the comments!

The post WordPress Google Maps Guide: Embed With or Without a Plugin appeared first on Kinsta Managed WordPress Hosting.