WordPress 5.1 “Betty” was officially released on February 21, 2019, and is available for download.

WordPress 5.1 is the first major release since the launch of the WordPress block editor (AKA Gutenberg) in WordPress 5.0. And while it does bring some tweaks and improvements for the block editor, the biggest new features in this release involve the WordPress Site Health project and notices for PHP versions.

In this post, we’ll take a look at all of the new features that might affect how you use WordPress:

Here at Kinsta, we always recommend using the latest versions of PHP for improved performance and security.

From our benchmarks, PHP 7.3 is on average 9% faster than PHP 7.2. And If you compare PHP 7.3 to PHP 5.6, it can handle almost 3x as many requests (transactions) per second! You should always test your plugins and themes first on a staging site for compatibility. If all is good, make sure to take advantage of this free performance boost.

WordPress is now finally getting on board with pushing the latest versions of PHP with some new tools and notices to promote PHP versions and compatibility.

First up, if you’re running an outdated version of PHP on your server with WordPress 5.1, you’ll see a new dashboard widget prompting you to upgrade your PHP version.

If you host at Kinsta, there’s zero chance you will see this message because the minimum PHP version that we allow is PHP 5.6. Right now, the warning will only trigger for PHP versions under that.

We wish the WordPress team had gone with a higher version, but this is a step in the right direction. Also, if you click on the button to “Learn more about updating PHP” in the notice, the official WordPress docs do recommend PHP 7.3.

Beyond the soft prompt in the WordPress dashboard, WordPress 5.1 also adds forced PHP compatibility checks when you go to install a new plugin or theme. This is awesome for developers!

In WordPress 5.1, if you try to install a new plugin or theme from WordPress.org where the developer has set a minimum PHP version higher than the version on your server, you’ll see a message telling you that “This plugin doesn’t work with your version of PHP. Learn more about updating PHP.”

Additionally, you will be prevented from installing the plugin. At this time, you can get around this by manually downloading the ZIP file from the repository and installing a plugin that way. But really – just update your PHP version! 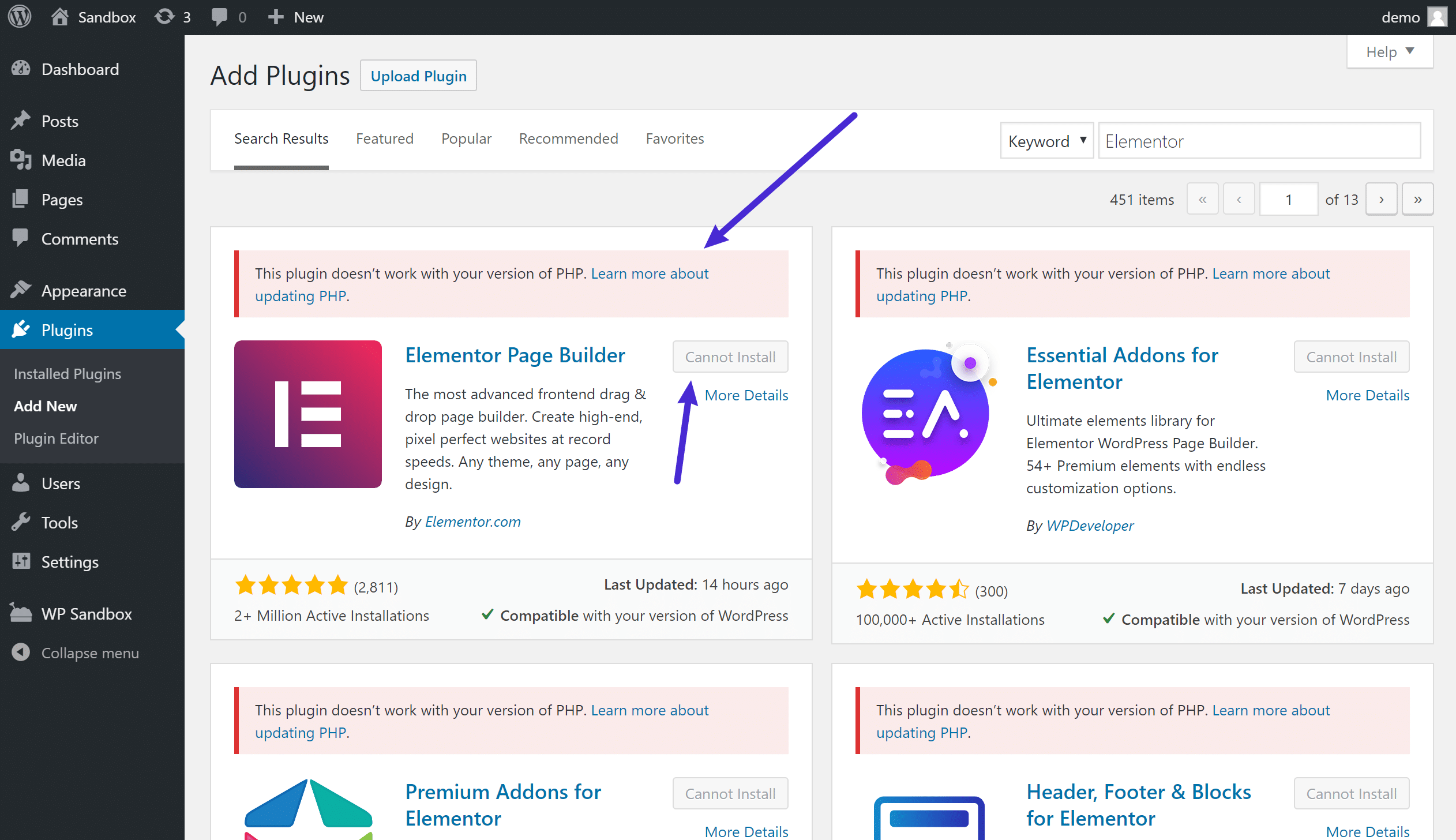 The PHP compatibility check for plugins

WordPress 5.1 was scheduled to introduce a new feature called “fatal error protection” which would protect from the WordPress white screen of death while updating PHP.

Unfortunately, this feature was been pulled from the WordPress 5.1 release at the last minute. However, it’s for good reason.

The fatal error protection mechanism explained here has been pulled out of the 5.1 release as it had several flaws critical enough to postpone the feature. A new path to address the issues is underway via #46130 and is intended to be released as part of WordPress 5.2.

With this protection, WordPress will recognize when a fatal error occurs and pause the offending theme or plugin in the WordPress admin dashboard so that you’ll still be able to log into the backend of your site and (hopefully) fix the problem. For less tech-savvy users, this will be a great new feature once they iron out all the problems.

If your site experiences issues while upgrading PHP versions, it will look like below on the front-end, but you should still be able to log into the backend to fix the problem. 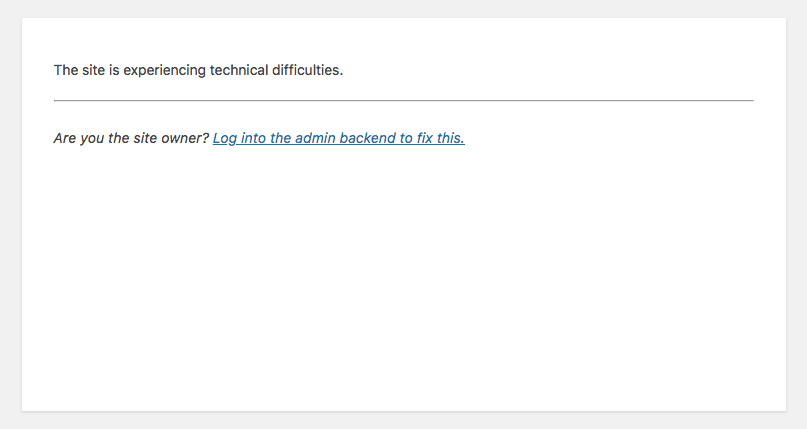 As such, the biggest changes to the block editor in WordPress 5.1 deal with performance. Compared to WordPress 5.0, you should see faster load times in the editor and a shorter KeyPress event time.

There’s more good news, too. The block editor performance will get even better once the most recent versions of Gutenberg are merged into the core – you can see a performance comparison of different Gutenberg versions below (remember – WordPress 5.1 includes Gutenberg 4.8 – so that’s where we’re at right now).

Beyond the new user-facing features above, WordPress 5.1 also packs some new features for WordPress developers.

WordPress 5.1 offers a new JavaScript build option. You can learn more about the specific tweaks here.

How to Update to WordPress 5.1

Since every customer’s site is different we always recommend utilizing the one-click staging environment. You can clone your live site in a matter of seconds and then test WordPress 5.1 with your existing theme and plugins to check for compatibility. You can of course also take a manual backup before updating your live site, just to be safe.

To update WordPress to 5.1 simply click on the updates icon in your WordPress admin dashboard. And click on the “Update Now” button. While your site is being updated, it will be in maintenance mode. As soon as your updates are complete, your site will return to normal.

How to update to WordPress 5.1

As long as everything goes well with the update you should then see the “What’s New” screen. And that’s it! Quick and easy.

Whenever people update a major version of WordPress, there are always some that experience issues, and that is due to the thousands of different plugins and themes currently co-existing in the market. Here are a few ways to troubleshoot common issues.

While there aren’t any big front-facing features in this release, WordPress 5.1 adds some great features to push for healthier WordPress sites.

The focus on PHP versions will hopefully push the large percentage of WordPress users running out-of-date PHP versions to update to more recent versions, and the block editor performance improvements are much welcomed.

What do you think of WordPress 5.1? Does anything catch your eye? Anything you wish they would’ve included?