What Is XML and How Can You Use It With WordPress?

Extensive Markup Language (XML) is everywhere. It’s used for servers, web security, updates, and more. When it comes to WordPress, it doesn’t get as much attention as more popular languages like PHP. However, knowing what XML is and how it works can be very useful to any website owner or developer.

In this article, we’re going to talk about XML’s basics, and discuss some of its most common uses. Then we’ll explore a few of the ways you can use XML in WordPress.

What XML Is (And Where It’s Used)

XML is what’s called a ‘markup language’. That means it’s a language based on tags used to add information to elements within files. One key distinction of markup languages (as opposed to programming languages, for example), is that they’re designed to be easy to read by both machines and humans.

Here’s an example of a simple XML snippet, to give you an idea of what it looks like in action:

If you save this snippet as a .xml file and open it with a browser, you’ll notice that the browser recognizes it as code. However, you can’t just use any tags you want – there are approved schemas for XML that you’ll need to use. If you include the wrong tags, your browser won’t be able to understand the results and display them properly.

Markup languages, as a whole, are much more versatile than you might imagine. Another example of this type of language is HTML. It’s the skeleton of the entire web, but still remains easy to pick up, even if you don’t have a programming background.

As far XML itself goes, it has a lot of uses. It’s frequently used to store, transmit, and display data, for example. In addition, it’s used in web development to store information in plain text, which makes that data easier to import and export. Throughout the next few sections, we’ll show you some of those applications in action.

How to Use XML to Create Sitemaps

As you may know, search engines use ‘crawlers’ to visit your website, determine what pages it contains, and then index them. Then, the search engine uses all of that information to generate lists of relevant results: 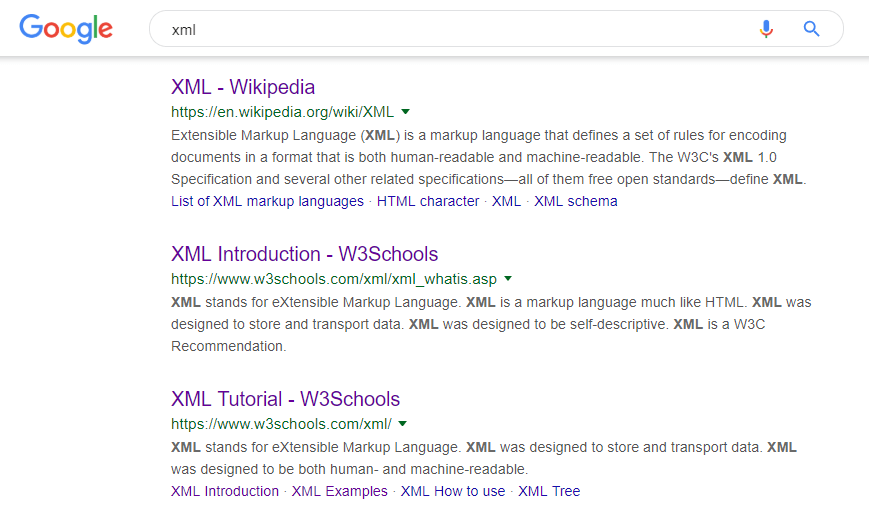 The problem is that crawlers sometimes miss content. They can also index pages you’d rather search engines not see, or ‘detect’ duplicate content where there is none.

The best way to avoid these issues is to create a sitemap, which is a list of all the pages that make up your site and information about how they’re connected. Here’s what a simple sitemap might look like:

Naturally, a real sitemap would include a tag for each page you want search engines to index. You can also include additional information, such as when each page was last modified, how often the search engine should check it for updates, and more.

Keep in mind that you can also create HTML sitemaps. In fact, it’s best to use both that language and XML. While it’s possible to do this by hand, by far the easiest way to create a sitemap if you’re using WordPress is by picking up a dedicated plugin.

3 Ways You Can Use XML Files in WordPress

Sitemaps are important, but they aren’t the only use case for this particular language. As we mentioned earlier, XML is widely used to store and transfer information. Let’s look at three ways you can use this functionality in WordPress.

Even the simplest WordPress website includes more data than you might imagine. In many cases, each plugin you’ve installed will also store its own data set, which you can sometimes import and export as an XML file.

One example of this is WooCommerce. A lot of WooCommerce extensions enable you to export your product list – including all of its associated data – as a plain XML file: 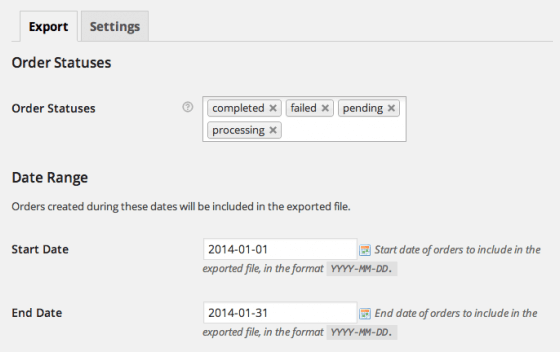 This can come in handy for your records, or if you want to import the same products into another website. A lot of other plugins also do this, although some of them rely on the CSV format instead for importing and exporting data.

Installing a new WordPress theme is no small feat. Whichever theme you choose will significantly affect your website’s style and functionality. This means that before you settle on one, you’ll need to take a good look at how it will affect your particular site, rather than simply exploring demo sites set up by its developers.

Theoretically, you can test your new theme on a live website, and revert to your old one if you don’t like the changes it makes. However, that’s not a particularly safe approach. A better method is to use a local or ‘staging’ site, install the theme you want to test, and import dummy data to see how it works in action.

WordPress.org, for example, offers an XML file that contains a full website’s worth of testing data. To use it, all you have to do is download the file, go to your WordPress dashboard, and select the Tools > Import > WordPress option:

In practice, this works just like importing another WordPress website’s content into your own. When the process is over, you can open your website and see how your theme looks with all that new content. It shouldn’t take more than a few minutes, and it will give you a better idea of whether you want to use the theme in question or not.

Last but not least, what if you want to transfer data from one WordPress website to another? To do this, you’d need to go to the Tools > Export tab and choose what content you want to export, from among posts, pages, media, and so on:

WordPress will generate an XML file, and download it to your computer. You can then repeat the same process as in the previous section, by going to the Tools > Import tab of the second website and uploading the XML file.

Keep in mind – this process will import your WordPress content, but it won’t affect the plugins or themes you’re using. To transfer those as well, you’d need to perform a full migration. It’s also worth noting that you can use a similar process to migrate your WordPress.com content to WordPress.org. That’s how versatile XML can be.

The purpose of a markup language is to include information in a way that’s easy for both people and computers to understand. There are many languages that fill this role, but XML is undeniably the king of markup.

Just to give you an idea of how versatile XML can be, let’s recap a few of the ways you can use it in WordPress:

Do you have any further questions about how to use XML in WordPress? Let’s talk about them in the comments section below!

The post What Is XML and How Can You Use It With WordPress? appeared first on Elegant Themes Blog.