The Most Beautiful Apple Stores in The World

When it was first announced, the idea of Apple having its own retail store was not received well by many quarters – here’s a commentary by Bloomberg business on why “Apple Stores don’t work” dated May 20, 2001, published a day after the first two Apple stores were launched by Steve Jobs himself.

Nearly 15 years later, Apple has more than 400 of their retail stores worldwide.

The majority of Apple Stores is standardized: each store has a clear glass front with panels stacked on either side of the main door, lighting that cut across the front of the store to the back, the same make and design of shelves and tables, a high ceiling and an overall minimalistic yet boxed up feel. This design and layout was actually patented in 2013.

That said, many Apple Store designs worldwide break the mold and truly outshine their predecessors with amazing architectural leaps of faiths – carefully calculated deviations that do nothing but impress loyal fans and dissenters alike.

Steve Jobs was not only the brains and vision behind many of Apple’s early and iconic products, he also directed his attention towards glorifying and glamming up Apple retail stores (as they were called in early press releases) to the point where even today, fans still queue up for hours, sometimes days in advance to be one of the first to enter a newly launched Apple Store.

To understand the allure, let’s delve into the architectural history of Apple Store design, and to do that, we will have to start at the beginning.

To undull history, I cheated and turned this section into a 10-item list.

An Obsession With Glass

It’s clear to anyone who has ever stepped into an Apple store that they have a fixation on glass. Apple’s tradition of having glass staircases as a common fixture in an Apple Store notably began with New York City’s first Apple Store in Manhattan’s SoHo district. The store featured the first of a long line of glass staircase designs that would connect future multi-storey Apple Stores.

The steps of the glass staircase in the SoHo store were made of opaque glass panes attached to side glass walls. Stainless steel bars are strategically and aesthetically positioned to guide visitors without taking away the element of elegance the structure portrays.

The design of the staircase was later on patented and the material further enhanced 10 years later in 2012. The new upgrade featured 13 m long zig-zag glass side walls made entirely out of a single pane of glass, removing any signs of dividing or adjoining lines.

Apple’s obsession with glass does not end with the staircase. It sought to build whole buildings made predominantly of glass. Take for instance, the Palo Alto store, which was the 9th Apple Store to be opened in the US and the first “street-level” Apple store. Back in 2001, it looked something like this.

Then, in October 2012, they closed down this shop to move to a newer, more modern Apple Store version, complete with stone panel walls, glass windows and curved glass rooftops.

Much better. And yet, when this store was open in October of 2012, a former Apple employee who visited the store wrote about how it was too loud to be in, citing architectural oversight as the cause of this noisy atmosphere. Others believed that the higher-than-expected noise levels was planned all along.

In any case, the same building design would be revisited in Third Street Promenade in California, Highland Village, Houston, Texas as well as the stunning Upper West Side, in New York City.

The building that was there, before Apple built their store at the Third Street Promenade, housed a three-story Borders bookstore, at which time a real estate firm bought the property for $26 million. They tore down the building and rebuilt it to its sole tenant, Apple’s specifications, and later on sold the property for $60 million. 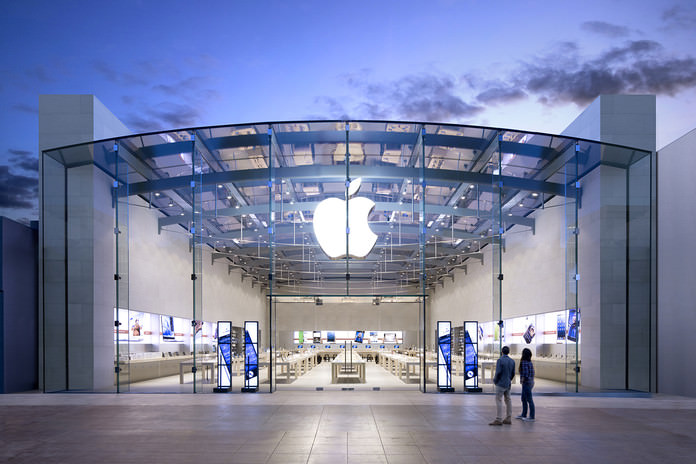 Two years later, the new buyer turned seller, and resold the property for $100 million – at roughly $5,700 a foot. This happened in under 5 years. As much as Apple’s retail stores are great for increasing local market values however, it isn’t all a bed of roses for all their locations.

The Highland Village store is designed similar to Palo Alto and Third Street Promenade except it had the additional glass back wall. The store was also among the 5 unfortunate subjects of a shooting spree by unknown gunmen in the wee hours of May 1, 2012.

Two of the glass panels were shattered by the bullets (see pictures of the damage here) but still held in place. The glass panels were later taped up with adhesive tape for extra measure, as they await replacement parts. If you ever wondered about the quality of the glass material used to build many of Apple’s stores, there’s your answer right there.

Of all the stores that were influenced by the design at Palo Alto, it’s the one in the Upper West Side that really turns heads. Unlike the original design however, a larger portion of the glass building protrudes out into the street. The side and front of the store are built parallel to the street corner it’s on, giving it a sharp edge structure, that strangely enough, cannot be noticed at all when viewed from the right angle (see image below).

The 40-foot-high glass building takes advantage of the daylight pouring in from above, while the wall panels fill the room with reflected light. The store also has a spiralling glass staircase that leads to an underground floor and the Apple logo hangs inside the multi-award winning building.

The Apple store at Wangfujing also spots a curved glass not on the roof but at the storefront. The glassy curved storefront design was also in use at the Altmarkt-Galerie store and Dusseldorf store in Germany. Wangfujing is the third store in Beijing after two others were opened in Sanlitun and Xidan Joy City. It was the largest one in Asia, at 25,000 sq ft locatedly roughly a mile from the Forbidden City. Thousands thronged the store on the first day itself.

Apart from its prime location, and massive size, the store is also renowned for housing a three-story glass staircase, a rarity in Apple Store design. It is only available in two other Apple Stores, the first on West 14th Street, New York, and another in Boylston Street, Boston, Massachusetts.

When it comes to featuring Apple Stores in China, there will always be couple of stores that cannot be left out. They are the stores in Pudong, Shanghai, and Jiefangbei, Chongqing.

The second Apple Store in China opened in Pudong, Shanghai with a whole new look. A cylindrical glass entrance took center stage in the plaza with a spiral glass staircases that leads into an underground store 1,500 sq meters large.

While designing the Pudong cylindrical glass entrance, Jobs had the idea that the plaza surrounding the entrance would look nice as a circle. It wasn’t one at the time construction but Jobs had a discussion with the developer and according to Peter Bohlin, BCJ architect and fellow collaborator, Jobs successfully convinced the developer to redesign the plaza the way he had envisioned it.

The same cylindrical entrance is also erected in Jiefangbei which opened in Chongqing China in January of 2015. This version is smaller than the 40-foot block in Pudong but Apple took pains to make the unveiling a spectacular one.

Before the unveiling of the glass cylinder, the structure was wrapped in a mural that was the combined work of art between two artists. US photographer Navid Baraty had taken a photo of the city skyline and local-born painter, Yangyang Pan added her own interpretation to the photographs. Check out the video of the collaborative effort.

The Apple Store at the corner of 57th Street and Fifth Avenue is easily one of the most beautifully designed retail building in Midtown. The glass cube entrance stands in front of the GM building and customers descend down into the underground store via a (you guessed it) glass staircase.

And yet the value of that basement area was unrealized for 40 years before a demo in the middle of the night by property mogul, Henry Macklowe helped cemented Steve Jobs’ vision for what would become one of the most iconic 32 foot cube in the retail industry.

Like many other Apple Stores on this list, Bohlin Cywinski Jackson were also the architects behind this marvel. The store was opened in 2006, but briefly closed for a hardware upgrade to the cube building in 2011. Stronger, larger, more transparent and fewer (from 90 to 18 pieces) glass panes replaced the originals, leaving behind a clearer and purer form of engineering ingenuity. But the best was yet to come.

The Zorlu Center was the first Apple Store of two in Turkey opened in 2014. It was designed by Foster and Partners, the firm behind Apple’s much-awaited campus (opening in 2016, fingers crossed) and also the Westlake Apple Store in China.

The design featured an exquisite “carbon fiber reinforced plastic” ceiling and 10m long by 3m high glass side walls, held together with structural silicone. The entrance led underground into the 20,000 sq ft Apple Store via a glass staircase. The glass entrance also allowed in natural lighting much like Upper West Side.

Apple Zorlu, or also known as the Glass Lantern took home the Supreme Award for Structural Engineering Excellence in 2014 as well as the award in the Commercial or Retail Structures category.

Apart from Apple’s love for glass buildings, many of the Apple Stores are also built in heritage buildings. For these stores, a lot of money is put in to restore the buildings to their former glory. This includes renovating the interior to integrate both Apple’s modern yet minimalistic look and the historical feel the buildings give off.

The Covent Garden store building was home to a 19th century hotel and required tens of millions to have its brickwork and stone arches be reworked and restored.

Instead of the usual high-quality glass, Apple sought to bring out the beauty of wood and iron in the Opera Apple Store, built inside a building that was once a bank in the 1920s. Although this is also one of BCJ’s work, you’re not going to find any glass staircases here.

Instead, the practice reproduced 6 chandeliers from old photographs, and kept much of the building’s architecture intact albeit restored.

The building served as regional HQ for General Douglas MacArthur himself in the second World War but prior to Apple’s takeover, it lay bare for a year after a bookstore and artworks store closed shop there. Much restoration work was done before the doors were opened to the public in January, 2014.

This was the seventh Apple Store in Germany and this spot was previously home to one of the city’s biggest jeweler.

This beautiful post-Spanish Civil War building was home to a hotel, then the head office of a bank before the 27,000 sq ft of space was turned into an Apple Store.

The post The Most Beautiful Apple Stores in The World appeared first on Hongkiat.