Getting paid for your work can be hard. If you’re a content creator, there’s a high chance you’ve been low-balled on a number of projects. Or worse, you’ve been asked to write for exposure. Two of the more successful ways of monetizing your content creation are Patreon or starting a membership site. Now there’s another option: the LaterPay WordPress plugin. Taking a different approach to online content monetization, LaterPay gives your users a better experience for consuming your content, while still making sure that you’re paid for your work.

What is the LaterPay WordPress Plugin?

At its most basic, LaterPay is a content-restriction plugin. It’s a paywall. You publish some kind of content, and users pay you for access to that content.

Except…the LaterPay WordPress plugin is more like a paywall made out of glass.

With the plugin installed, you are able to set prices on your content access. You can set prices for a single article or for access to the site for a specified period of time. That’s the normal part. That’s what LaterPay shares with other content restriction plugins. The part that sets LaterPay apart is that the users get access to the content before they actually pay for it. 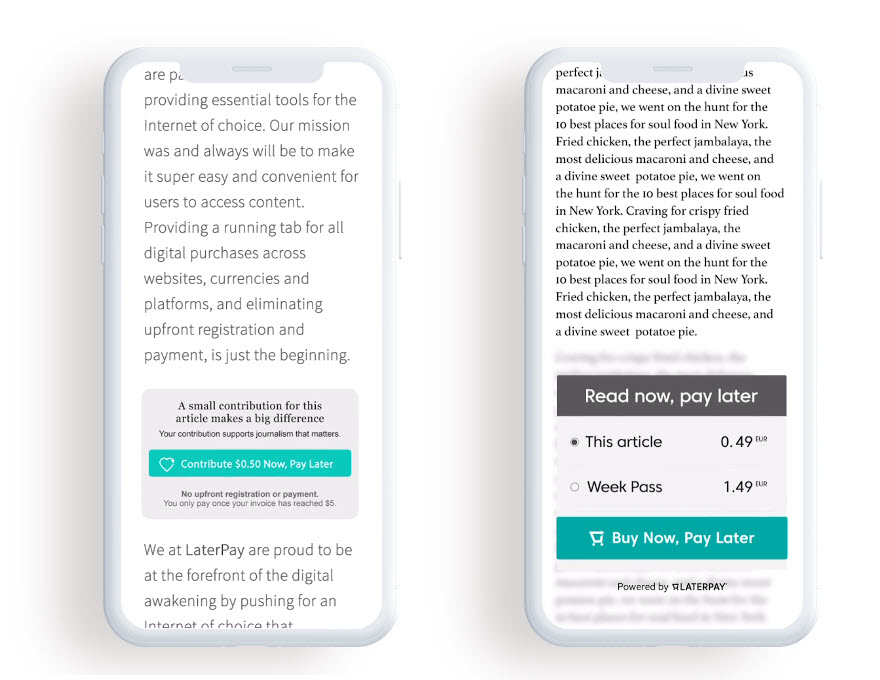 That might sound crazy, but LaterPay’s business model is based on that. The user agrees to pay for the article, simply clicking their desired price/access level, and they get access to the content. Immediately. Right then and there. They agree that when their balance gets to $5.00, they’ll pay their invoice.

The LaterPay WordPress plugin works as an honor-system method of monetization. To some of you, that probably sounds downright insane (and if that’s the case there is a Pay Now option). To others, you may be seeing the genius behind the Pay Later model. Let’s dig a little deeper.

LaterPay wants to be a replacement for traditional online ads. Google AdSense and other networks are becoming less and less profitable because of ad-blocking software. Because of that, LaterPay is an option for you to present an ad-free experience for your users, while at the same time being able to monetize your content.

According to their numbers, 17% of users end up buying a pass to content. That’s a very high conversion rate for mid-funnel clicks. Additionally, of that 17%, 85% actually paid their invoices. That equals out to roughly a 14.5% conversion rate, which is still very high.

They also claim that their Pay Later option has more than twice the recurrence rate as the Pay Now. Meaning that when you trust your users and treat them well, they come back to you and want to give you money. And by giving them the option to pay later and to see the content without breaking the experience to sign up and enter payment information. Plus, they get to see the trust you place in your own content because you will offer it up to them on the honor system, expecting them to pay for it.

People who don’t believe in their products don’t do that.

Actually using the plugin couldn’t be easier. When you install LaterPay initially (it’s available on the WordPress plugin repository), a new menu item will appear in your WP admin dashboard called LaterPay with three tabs: Account, Appearance, and Pricing. 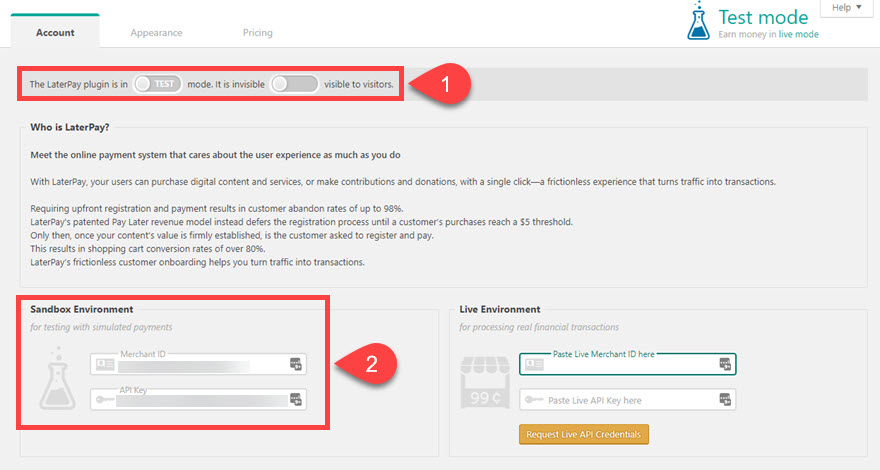 The two important parts (to begin with, at least) are the toggles for test mode/user visibility up top and the Sandbox Environment box at the bottom. When you start up LaterPay, you begin in test mode. Nothing you do will show to your users, and it lets you get things set up and test how the content restrictions appear before they go live.

You are given a default API key and merchant ID when you start, but you have to apply to be a LaterPay Merchant on their site when you’re ready to go live. (For tax and payment reasons, etc.) 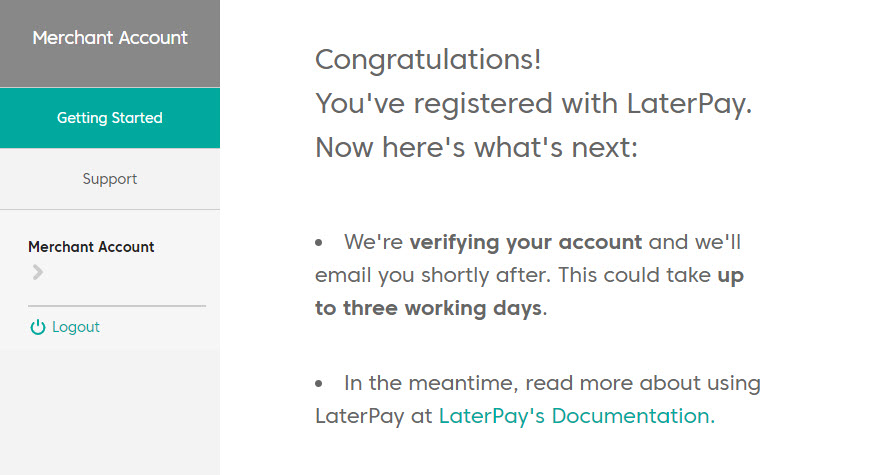 There’s a 1-3 day waiting period to be approved, but until then, you can play around in Sandbox mode to get a feel for the plugin. The live version is no different. 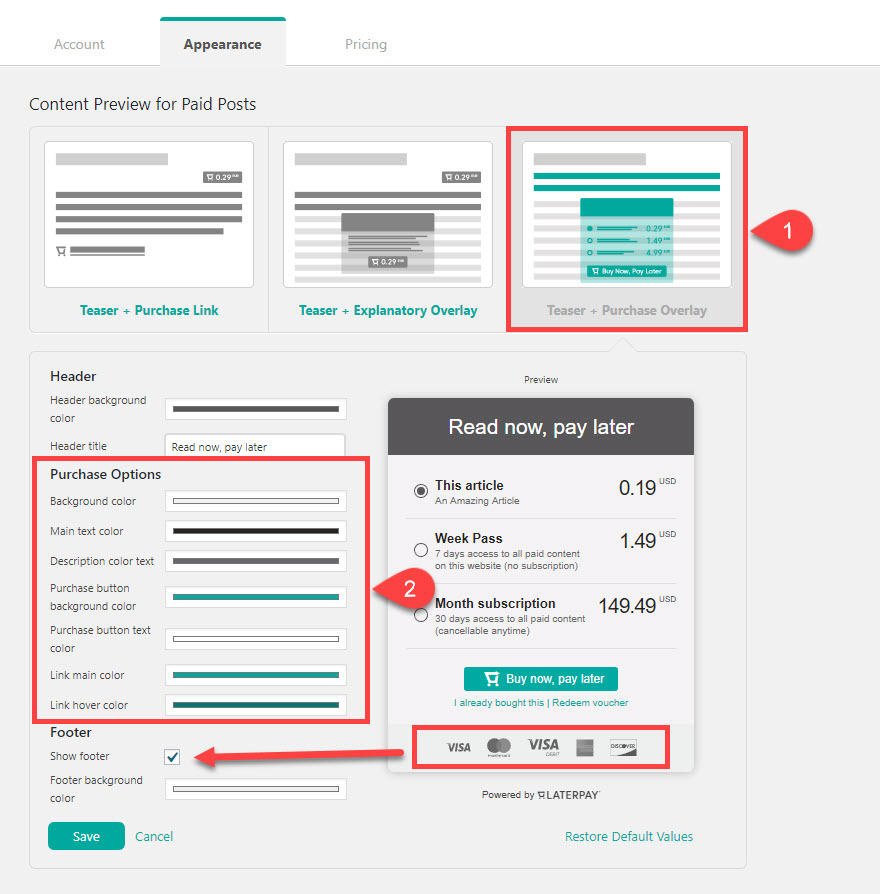 You can customize nearly everything about the appearance in LaterPay. You get access to RGB palettes for background colors for every element and button, all the links, text, and so on. Even the hover color gets a built-in custom field. If their default green clashes with your site, no worries. You can make this look as at-home as anything else on your site.

At the top of the screen, you choose the type of message you display to your users. You can have a standard pop-up over the content (which is enabled by default) or you can create an in-line link that blocks the content until they agree to pay later.

In addition to that, LaterPay has a slew of documentation that leads you through the process to create a number of different links and buttons after your merchant account has been approved. So if none of those options looks like the right option for your site, don’t worry. That’s just what you get by default with the LaterPay WordPress plugin. The API and platform itself are more robust.

And then there’s the real meat of the LaterPay WordPress plugin: pricing. In the Pricing tab, you can set how much you want folks to pledge to your site. Before that, however, you need to determine what parts of your site actually displays the LaterPay dialogs.

Below that, you actually set the prices. You have 4 separate options to tinker with. 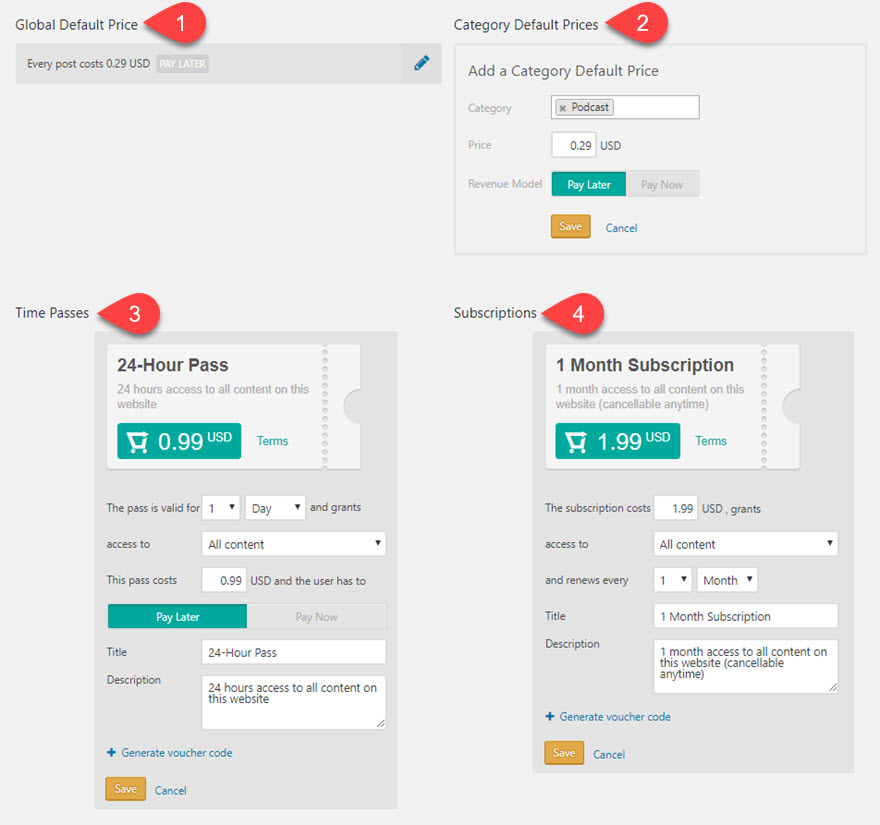 The first is the generic price for your site. If someone decides to pay for your content and you haven’t set up a specific price for that content, it will default to this value. Initially, it is set at $0.29 USD. It can range anywhere from $0.05 to $149.99 USD.

After that, you can determine if there are any categories (2) you want to specifically monetize. The price you set for individual categories is per post. Users will pay the amount you set (between $0.05 and $5.00 USD) for each post within the category, not for access to the entire category. So if you value access to your Podcasts category higher than your Blogs, you can charge $1.99 per podcast, but keep it at the $0.29 general price for Blogs.

You can also set Category access to Pay Now, which is a traditional content restriction set up. But your price must be at least $1.99 USD, with a max of $149.99.

The Time Passes (3) and Subscriptions (4) blocks are pretty self-explanatory. You pick how much access users get to what part of your site for a set amount of time. The difference between them is that Time Passes are limited duration and one-off purchases, while Subscriptions are recurring. You get three choices of access: all content, all content except X category (or categories), or all content in X category (or categories).

You can also generate coupon codes from this screen, which people can use to lower the price of a Subscription or Time Pass.

Just to show what’s possible with LaterPay, we wanted to show you how Salon.com integrates it. They don’t do it on any individual articles but instead have a banner at the top of the page advertising an ad-free experience.

When clicked, you have a choice of subscription models, including the Time Passes we looked at earlier. The footer includes an explanation of how the LaterPay service works. 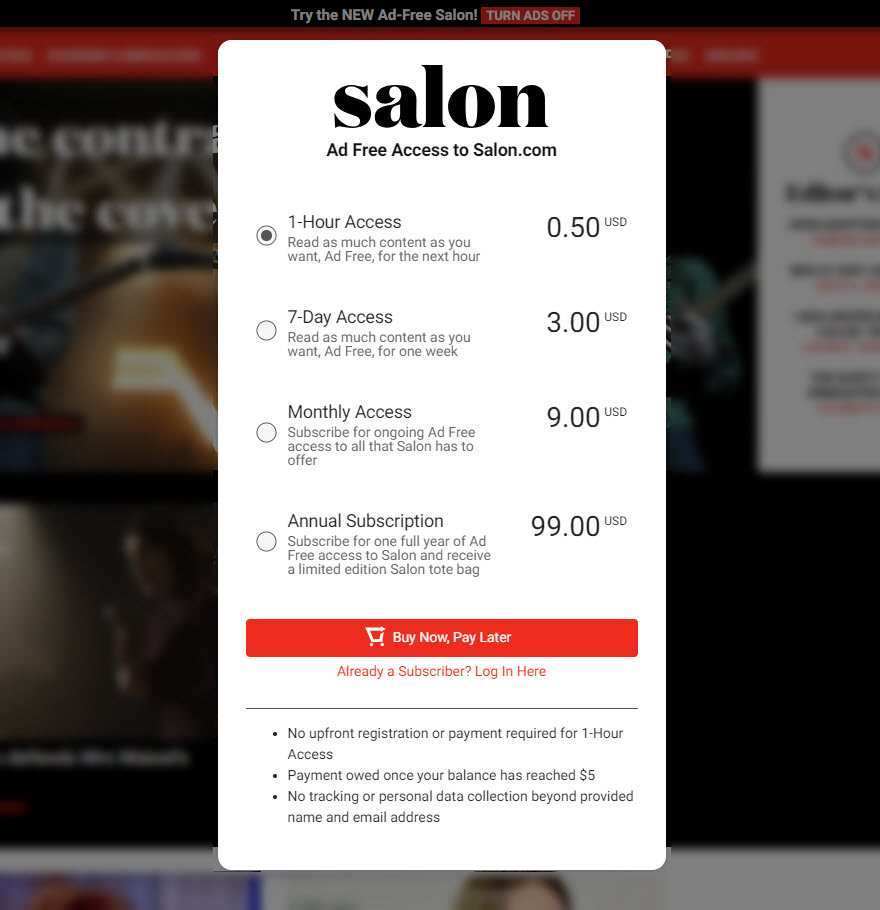 And at the end of the articles, a custom banner appears that brings up the exact same modal with subscription and timed access.

These links and buttons can be generated through your LaterPay dashboard on their website once you’re approved as a Merchant. This may not be the specific method you take for your site, but we did want to point out a major website using the actual Pay Later aspect of the product and (supposedly) succeeding with it.

There’s no doubt that it’s an odd business model to give your customers the product before they pay you for it. But the trust you generate with them, as well as removing friction in the premium-content user experience can more than make up for it. If LaterPay’s advertised statistics are correct, and there is a net 14.5% conversion rate, asking folks for a contribution in good faith could seriously increase your website’s earnings. Especially as CPM ad revenue continues to fall.

What do you think about the LaterPay WordPress plugin? Do you want to give your users the option to pay later?