One of the arguments for using WordPress is that affordable help for the platform is easy to find. It’s something I have seen claimed around the web a lot of times and I have made this argument myself, repeatedly.

It seems simple enough: WordPress has less of an entry barrier for developers, meaning it’s easier to get into. It also has the largest ecosystem among all content management systems. That should mean a high supply of developers, which should result in low prices.

However, it recently occurred to me that I have no concrete evidence to support that claim. Like other people, I simply repeated what I heard elsewhere and what my gut feeling told me. Therefore, I thought it’s time to find out if that claim is actually true.

That’s exactly what I will attempt to do with this post. As I’m typing this, I’m not entirely sure yet how I am going to approach that task. I guess we will find out.

Some Clarification on the Methodology

So, before we get started, I probably need to clarify what exactly I’m trying to find out. When I’m asking whether WordPress developers are cheaper, the first question I need to ask is “cheaper than what?”

First, I would claim that the goal of most people in hiring a WordPress developer is to end up with either a new WordPress website or to get help in fixing or improving their existing site. For that reason, it makes sense to compare the money WordPress developers earn for this kind of work with the income of other developers for similar or the same work.

As a consequence, in my comparison, I will especially concentrate on people working with Joomla and Drupal, the other two most popular content management systems. However, I will also take a look at the income of general web developers. In both cases, I will examine freelancers as well as people working in salaried positions.

The next question is, how do you define or calculate the average price of a WordPress developer? Price is not only dependent on the typical hourly pay but also on how long it takes for them to complete their work.

Logically, if someone is paid less per hour but takes on average twice as long as other developers (for example, because the work is more complex), the end result will not come out cheaper. So, I will have to try and find ways to determine both hourly income as well as total earning per site.

Finally, there is one caveat for the numbers below: one of the reasons why getting data on how much WordPress developers earn is so difficult is that the term developer has been muddled down a bit, especially in the WordPress sphere.

That’s mainly due to the ease of use of the platform. It is both a gift and a curse as it allows a lot of people to build websites for a living without being able to code. These are often called WordPress implementers. Since they often get mixed in with true coders, it skews the numbers a bit.

Implementers are probably among the main reasons why WordPress developer rates cover such a wide margin. In more technical CMS or pure coding professions, this doesn’t happen in the same way. So, keep that in mind throughout.

Alright, now let’s get to the meat and potatoes of this post. First, we will try to figure out how much WordPress developers earn per hour. There’s a bunch of information on that online, although not nearly as much as you would expect.

There are several articles out there with information on this matter. WP Engine did some research on people working with WordPress in 2015. In it, they also covered the average hourly rate of WordPress freelancers. 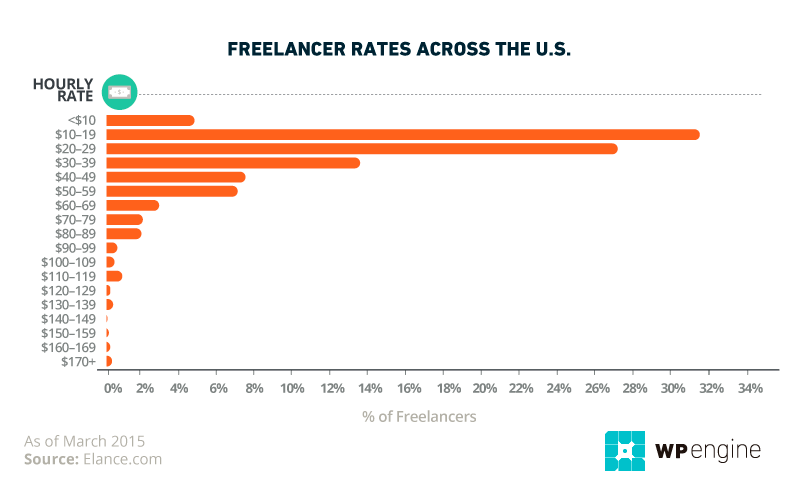 The average comes out as a little more than $29/hour, as Rachel McCollin calculated in her article. Keep in mind that this information is for the US only and covers data from one single job portal.

Rachel also goes through additional data that brings her to the conclusion that WordPress professionals earn somewhere between $25 and $36 per hour.

Post Status, on the other hand, gives a rather broad range of $25 – $400. However, Brian Krogsgard readily admits that those are only estimates based on talking to people and working in the industry for a long time.

Another obvious place to look for WordPress freelancer rates are the various job listing sites. Here, you probably have the highest concentration of WordPress professionals. For all searches, I concentrated on independent contractors who work in web development and show up for “WordPress” as a keyword.

Here are the rates I found among the first 50 results:

That’s quite a discrepancy, however, not surprising given the wide range of skill levels and developer locations these platforms. Yet, it’s also important to note that the majority of people seem to operate on the lower end of this spectrum as this screenshot from PeoplePerHour suggests:

How Much Do WordPress Developers Charge Per Project?

Now that we have an idea about the various hourly rates, how does that translate to project cost? A few years ago, Brian Krogsgard tried to answer this in the aforementioned article. His verdict: the average custom WordPress website costs $3,000 – $15,000.

On the other hand, the average WordPress project on Upwork is just $194. Of course, we have no way of knowing if that is for entire sites or just customizations. Yet, somewhere in that mix are people building custom websites for amounts close to that.

Overall, it’s clear that WordPress development is much less costly for outsourcing websites. If you assume that building a custom WordPress site takes about 35-45 hours, with the rates found above you are looking at final costs between $175 and $5,400. Very much at the bottom end of the estimates.

Finally, let’s have a look at the salaries of WordPress developers. Here, too, the common perception is that they are lower than in other areas of web development.

Interesting. Add “WordPress” to almost any development job search and watch the salary magically drop 30%. Any thoughts why?

The WP Engine report above also had information on that. For the US, it saw average WordPress developer salaries in the $60,000+ category. This was on par with the median annual wage of web developers in general at the time ($68,670).

How Does That Compare to Other Developers?

To understand whether WordPress developers are indeed cheaper, we now need to compare these numbers to other people in web development. For that, let’s look at the same stats as above but this time for the control groups.

First, we will examine the hourly pay posted on a freelance job posting websites.

Quick note: Though it’s not obvious from the numbers I noted down, the average hourly pay for Drupal developers is definitely higher, especially on Upwork. The low numbers here are because some people give a range of hourly rates and I had to go with their lower limit.

How do these numbers translate to actual project costs? Again, it’s not very easy to get reliable figures here.

The only sort-of credible source I could find was this one (man, people really don’t like posting their prices online). It says to expect $2,000 – $9,000 for a basic to advanced website.

Aside from that, most estimates I found online say that building a static site takes around 40 hours of work. That’s comparable to WordPress. For that reason, I will take the same number of hours as I did for WordPress development and multiply it by the hourly rates I found earlier. Doing so, I end up with website costs of $350 – $4,455.

I couldn’t find any information on how long it takes to build a site with the CMS. Therefore, I will take the same hours as before. This gets us to $350 – $6,300 for a website built with the Joomla platform.

What everybody generally agrees on is that it takes a lot longer to develop a Drupal site. The numbers I found where somewhere around 60-80 hours. According to the hourly pay discovered earlier, this comes down to $480 – $9,520, so development costs are generally higher for Drupa than for everything else.

Finally, let’s have look at the average salaries for the different types of developers.

For Joomla, it was very hard to find any numbers. Only Neuvoo had information regarding Joomla developers and gave a median yearly salary of $62,469. However, this is only based on a sample size of four people.

So, are WordPress Developers Cheaper?

After all that complicated math (there’s smoke coming out of my ears now), it’s time to answer the question. To do so, let’s summarize the findings from above.

Of course, the above is overall by no means scientific. For example, you have to keep in mind that many of the freelancers offering WordPress services also do other PHP-based work such as in Joomla and Drupal. This makes complete sense, however, it also makes the results less clear-cut.

Yet, the information above still gives a good overview and a tendency. WordPress developers really seem underpriced, especially those on freelance websites. Because of their lower hourly rates, project costs for WordPress are also a little lower than for other areas. In addition, developers working with the platform also command lower salaries.

So, it seems that the claims I and others have been making are true on some level. However, it is also important to note that Joomla developers seem to fare even worse, at least based on the limited sample size. Only one thing is for sure: if you want to maximize your earning potential, you may want to consider learning Drupal.

What is your experience on being paid for WordPress development? Anything to add to the above? If so, please let us know in the comments section below!

The post Are WordPress Developers Really Cheaper to Hire? appeared first on Torque.